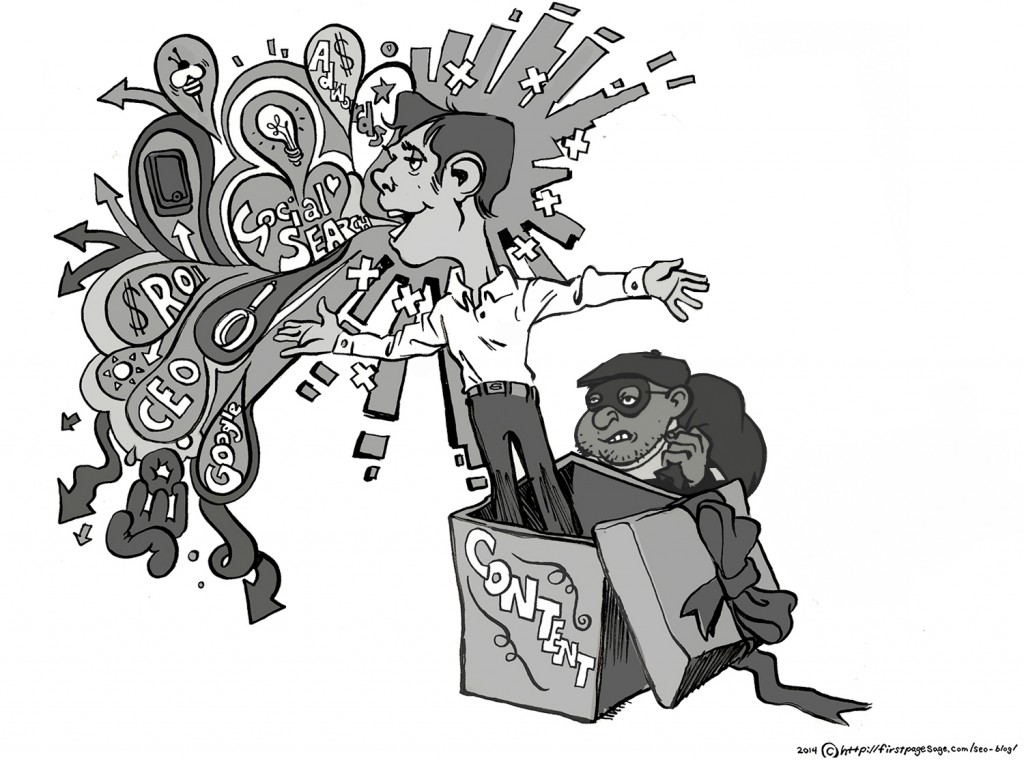 People ask me all the time why I take the risk of sharing my best knowledge through posts like this one. Won’t it breed competitors? Won’t it allow potential clients to do online marketing themselves instead of hiring my company to do it for them? I suppose these are reasonable concerns; those things could happen. But they don’t worry me, and I’m sure as heck not slowing down on sharing my knowledge with the world.

There are a few reasons why I believe in consistently giving away a portion of my time and hard-earned knowledge for free—an act otherwise known as thought leadership:

People are not going to steal your ideas as much as you think. As I mentioned at the beginning of this post, one of the biggest concerns people have about sharing their ideas freely is that people will steal those ideas. Yes, there are certain kinds of intellectual property you shouldn’t share because they are simply too proprietary. But if you’re offering something of true value, most of the value probably lies in the hard work of executing on those ideas. I’ve put into writing pretty much everything that First Page Sage does for its clients; and yet, I don’t worry for a second about another SEO firm taking that information and duplicating it. That’s because creativity and hard work put to the music of a well-run organization is not a commodity; if another company can replicate that, they deserve to succeed. Plus, there’s room enough for both of us to thrive.

It has a positive ROI. That sounds dry and businessy, but it actually comes from a much deeper place. I believe that when you give selflessly, you end up getting far more in return. It’s not easy to measure the return on gifting, but that’s the point: you shouldn’t. You should enjoy the act of sharing your energy with the world. Those that give with a passion – and whose gifts are appreciated by others – often find themselves with more than they need. Speaking, writing, and sharing what I have has led me to friendships, partnerships, and business relationships. I can’t track them mathematically, and I don’t care to. I just know that I feel excited every time I offer something up to the world because I never know who I’ll meet as a result. Everything you want in life comes from other people – so giving freely and often is a good philosophy to abide by. Do right by people and you will prosper.

It pushes your boundaries. Thought leadership – whether it’s giving speeches, blogging, writing books, hosting a show, or otherwise – is hard work. There will be times when it feels like it’s not worth it. There will be times when it triggers your fears. But the growth that comes from it is invaluable. For me, the best example of this growth is in the realm of speaking. I used to be terrified of public speaking. In fact, during my first speech approximately 5 years ago, I was so nervous that I temporarily lost vision for the first two minutes of my talk. My mouth kept moving, but my eyes weren’t seeing. I don’t think anyone noticed, and I finished my talk. Even though I was scared, I kept doing talks. By the time I had ten or so under my belt, I was starting to act naturally, like I was having a conversation with a friend. That’s when I knew I had conquered my fear. Today, I give a speech nearly every week!

I challenge you to take on thought leadership for your company. It’s not for everyone; you have to enjoy communicating, love people, and have a fierce work ethic. But I guarantee there won’t be a more valuable thing you do long-term for your business.