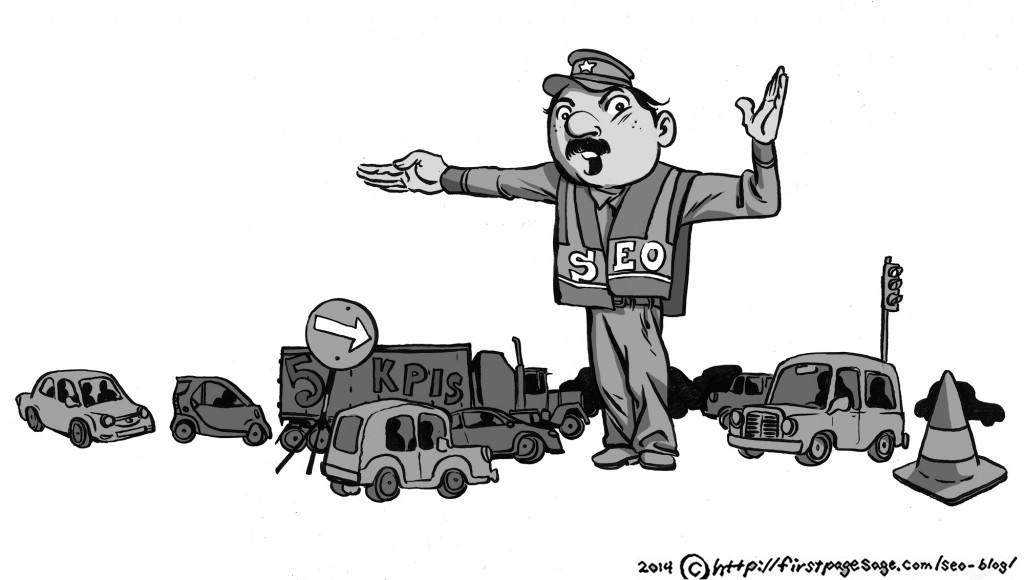 If you asked the average person how they would determine whether their SEO company is doing a good job, they’d probably say “By looking to see if my site is ranking better than it was before.” To most, SEO is simply the art of getting your website higher in the search results. In fact, that’s a pretty good literal definition. But if that’s the way your SEO company is actually measuring its results in 2015, you’ve got a problem.

Why, you ask, would it be a problem to use the yardstick of search rankings for an SEO campaign? Isn’t that the point? Actually no, it’s not. The point is revenue. You’re not doing SEO so you can get a shiny Google ranking to take a picture of and hang up on your wall; you’re doing SEO to get new business that grows your company.

In fact, of the 5 most important KPIs in an SEO campaign, none of them are search rankings. Of course, search rankings still matter a lot: they’re a means to an end. They matter in the same way that a tennis player’s swing matters to the outcome of a match. You don’t hear people saying “Djokovich had a really elegant swing in tonight’s match. I forgot the score, but man – that swing!” You hear them say “Djokovic trounced his opponent in three sets.” That’s what’s impressive: the win. What got him there is quite important, but it’s not the way you measure his success as a tennis player. In the same way, rankings are one of the key mechanics of an SEO campaign, but ROI is the measure of the campaign’s overall effectiveness.

Here are the 5 KPIs to watch in an SEO campaign:

• Non-branded, organic traffic. Probably the easiest way to see how an SEO campaign is doing is looking at the site’s traffic and comparing it to the traffic before the SEO campaign. But you can’t just look at overall traffic, even if it is the first thing you see in your Google Analytics dashboard. Yes, SEO does impact overall traffic but the tidiest way to view the campaign is by looking at non-paid (organic) traffic from search engines. And within that traffic, you’ll want to filter out searches for the name of your company and your key products. After all, your SEO campaign isn’t aiming to increase those kinds of branded searches. Those come from word-of-mouth and PR. A great SEO campaign will bring qualified, relevant traffic to your site via hundreds of long tail searches around the type of product or service your company sells. By using filters within Google Analytics or another analytics program, you can exclude branded searches, leaving you with the most obvious KPI: non-branded organic traffic.

• Number of new, high quality links. The lifeblood of an SEO campaign is links, and as such, you should be aware of the links that have been earned throughout your campaign. The links should be from generally relevant sites (not necessarily perfectly related, but shouldn’t be out of left field) and almost never from directories, forums, the comments sections of blogs, press releases, or social media sites (these links are not bad like the others, but they typically don’t count towards SEO). Depending on your industry, anywhere from 1 to 4 links high quality links per month is good.

• Content quality. While content isn’t something that can be measured numerically like most other KPIs, I submit that content quality should be a key area of interest when evaluating an SEO campaign. That’s because truly excellent thought leadership content not only delights Google, it leads to new links, conversion, press, business partnerships, speaking engagements, and a whole host of intangibles. Getting that part right can drive every other element of the campaign.

• Conversion improvements. I’d judge an SEO company favorably any day if they could take a conversion rate of 10% and made it 15%. That could be huge revenue-wise. To most SEO companies, that isn’t even a part of a campaign. To us at First Page Sage and any other competent firm, that’s one of the key pillars of a campaign. Making improvements to landing pages, including blog and article pages, to move people through the sales funnel, is about as important a job as there is in any marketing campaign.

• Leads. To the extent that leads is the most you can reasonably expect from your SEO team – that is, if people’s phone calls and form fills go directly to the sales team and out of the SEO team’s hands – then this is the bottom line of most SEO campaigns. Although it can be tricky to track leads from an SEO campaign, take the time to do it, as it will help everyone involved to understand the value of the work. Ultimately, no matter what the other KPIs look like, if leads are coming in and they can be traced back to SEO, the SEO folks are doing their job.

Live by these 5 KPIs, rather than getting bogged down measuring rankings, and your company will see the true benefits of SEO far more quickly.