Evan Bailyn has been delivering keynote speeches on SEO for more than 15 years. He is consistently ranked in the top 5 overall presenters in Vistage, the largest active speaker bureau in the world with over 1,000 speakers. His specialty is addressing CEOs and Marketing executives.

One of the early pioneers of search engine optimization (SEO), Evan began his career in the early 2000s, going on to start and sell five companies, including one of the highest-traffic entertainment websites online. For the past decade, he has been the CEO of First Page Sage.

Evan’s approach to SEO keynote speeches is highly interactive and audience-centric. He typically studies audience members’ websites in advance, using them as live examples as he describes the latest strategies and algorithm shifts in the world of SEO. 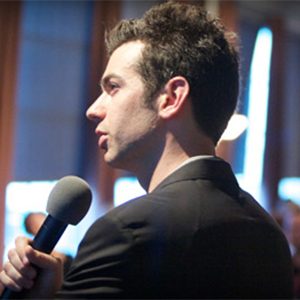 “Evan’s presentation was outstanding, offering member-specific take-aways of great value. He breaks down Thought Leadership and SEO into very understandable and manageable terms – better than anyone I’ve experienced in my 23 years of chairing. And on top of that, he is a genuinely wonderful human being. Working with him was a delight.”

“I have been a chair for 21 years and am non-technical. Evan’s presentation should be a must-see for every Vistage member! He is easy to listen to, I have sophisticated members and they all got high value. Very valuable learnings on SEO.”

“Evan is clearly very knowledgeable on the subject of SEO, and was able to not only convey overall industry best practices and suggestions, but provide specific analysis and recommendations for each of the organizations in attendance. I found the information very educational and expect that we will be able to implement many of the things discussed.”

“Lots of people claim to understand SEO and how to drive and convert leads over the internet, but Evan’s speech was the first time I have seen someone clearly explain a strategy that makes sense, and will work. Evan has already done it for himself, so he is the proof. If you are looking for the real expert, Evan is the real deal.”